New Headquarters Facility is under way!

The current Administration Building has served the District well since the 1970’s, but with the passing of time, it is aging, undersized, and inefficient. The Lakehaven Board voted to do something that has been anticipated for a long time: making the investment in a new Headquarters Facility. 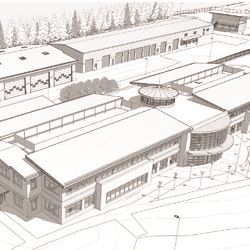 The new building will replace the current Administration Building, located on 1st Avenue (just north of 320th). With an increase in size, the new facility design will bring more staff to a central location enabling them to conduct business more efficiently.

This project will redevelop approximately 7.6 acres of District land to include a new main Headquarters building, a vehicle storage building, new driving lanes, about 156 parking stalls and other onsite improvements, as well as frontage and main entrance improvements along 1st Ave South. It is anticipated that the buildings will provide space for growth and be in service for over 50 years.

The District has contracted with Lydig for about $43 Million for all of the buildings and site improvements, plus a couple million for contingencies, including an expenditure of about $6 Million for the design and permitting. All totaled, the District has set aside roughly $53 million to complete the facilities in early 2023.

Once the new Headquarters building receives its certificate of occupancy and the computer network servers are up and running,  personnel in  the existing administration building will move in, allowing the old building to be torn down so that the final parking areas and landscaping can be completed. 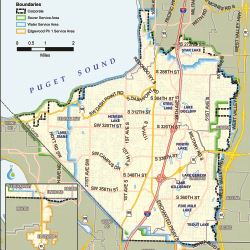 About 50 years ago,  three agencies serving the area: Lakehaven Sewer District, King County Water District 124, and King County Fire District 39 (KCFD) collaborated to buy a  roughly 10-acre site in 1973 along 1st Avenue South, north of South 320th Street. Around that time, the water and sewer service population was somewhere around 50,000 people. Today the service population is over 120,000 people.

The first two buildings were initially completed in 1977 and 1978. KCFD 39  occupied  a new fire station with its own administrative facilities,  and the District occupied a smaller new administration building.

In 1987, the sewer and water districts formally merged into one entity called “Federal Way Water and Sewer” with a portion of Water District 56 in the Redondo/Woodmont area added soon after. On August 7, 1994, the District changed its name to "Lakehaven Utility District" and the Fire District  later changed its name to South King Fire and Rescue. (On October 6, 2016 the District's name was officially changed to "Lakehaven Water and Sewer District" to better clarify the  services it provides to the community.)

As the District grew and space constraints became more  limiting, the District began to include additional funding in its capital improvement planning efforts to increase the service capacity of its existing site.

For Lakehaven, this location is a very strategic site. Not only is it fairly central to its overall service area, it sits above three highly productive underground aquifers to supply water to the community. One of these aquifers has enormous future storage potential which can be used to protect the community from future drought. So, maintaining an occupancy here was very important for the community’s needs. 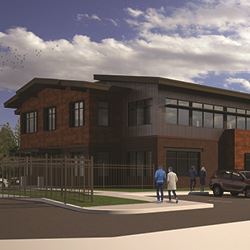 The main Headquarters building will be two stories with a total of about 41,000 square feet and is planned to house four  service departments. The exterior will reflect a Northwest architectural style with plenty of windows to let in natural light. The first-floor lobby will feature a high ceiling and two service counters that will serve customers and developers. The lobby will lead to a large meeting room that will be used for Board meetings and other events that need the large space. The Board meeting room will be updated with the latest digital and electronic equipment.

In addition to service counters, the first floor will house Customer Service, Billing, Administration and Human Resources staff, as well as the Development Engineering Department, and locker and shower rooms for the Field Operations staff. A staircase in the center of the lobby will lead to the second floor which will house the Water Operations, IT, Finance, Field Operations and Project Engineering staff. There will also be two additional conference rooms and a common lunch room with a deck off the back of the building. 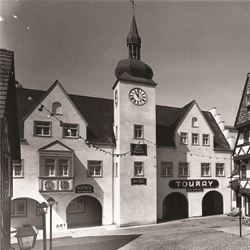 In partnership with the Federal Way Historic Society, there are plans to incorporate a historical display in the new lobby of the Headquarters building. The display will include pieces from the Old World Square Clock that was initially erected in the Federal Shopping Way in 1956, the same year that the Lakehaven Sewer District had formed.

Because the Headquarters building and the vehicle storage building are considered “critical infrastructure", both buildings will be constructed to a higher earthquake rating than conventional construction. The Headquarters building will be constructed to a Seismic Risk Category III which is the same standard that schools are built to, while the vehicle and equipment storage building will be Seismic Risk category IV, the highest level for essential facilities. 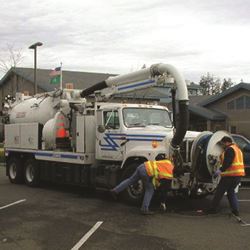 The new vehicle storage building will house most of the District’s mobile fleet. The building will be approximately 90' x 216' covering roughly 19,500 square feet and will feature seven drive-through bays, each 30' wide. Having the vehicles stored inside serves two purposes. With the vehicles kept inside during off hours, it will help prevent theft of tools  and vandalisms that have happened from time to time when the vehicles are kept outside. Inside storage also extends the life of the vehicles because they aren’t exposed to the weather 24/7.

The existing Water shop building which also stores vehicles, equipment, and supplies, will have its 15,000 square foot leaky roof replaced, extending the useful life of the building. Once the new Headquarters building is in service, the current office spaces will be vacated and made available for additional storage. 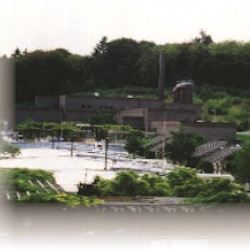 Thoughts of a larger and more integrated main campus were already taking shape in the early 90’s, but the District chose to continue to maximize the existing building for several decades. There have been several remodels of the administrative building, and several additions to add office spaces in the Watershop building. In the years after 2000, Field Operations crew were partially, then eventually, fully relocated from the Watershop to the Lakota Wastewater Treatment Plant a few miles away after it was expanded in 1990.

About ten years ago, the District began to include additional funding in its capital improvement planning efforts for this existing site as the facilities would need upgrades and/or replacements in the near future due to their age and size. Planning for funds at that time would lessen the financial burden later on to expand and make necessary improvements.

In 2014, the District began work with its architect at the time to complete a needs assessment, anticipating additional staff growth to meet regulatory requirements and needs of the service population. Also, planning was made for Field Operations staff and emergency equipment to be moved back to the more centrally located facility on 1st Avenue South to gain efficiencies for the service area. That assessment was completed in 2015 and, in 2016, the District embarked on a master plan for this site and completed it in the following year. 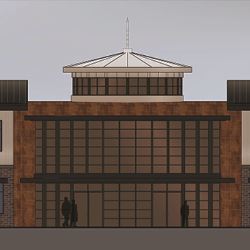 Parametrix helped prepare the project for presentation to the State’s Project Review Board and the District was successful in receiving approval from the State for its very first project under this delivery method. That allowed Lakehaven to bring Lydig Construction to the team in 2020.

Helix was able to finish the final designs and obtain permits in 2021, and Lydig identified an early need to pre-purchase steel joists and decking materials to help keep the construction of the project on schedule. 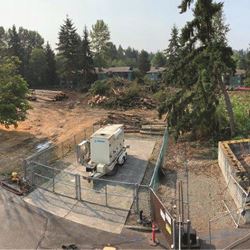 A birds-eye view of the land clearing at the start of construction. 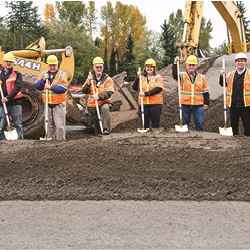 The District marked the commencement of construction on the new Headquarters Facility with a Groundbreaking Ceremony. The event was attended by District Board members and staff, representatives of state and local government, and other interested persons. Commissioner Peter Sanchez and General Manager John Bowman provided the audience with descriptions of the project and information about the new building, which is scheduled for completion in the early part of 2023.